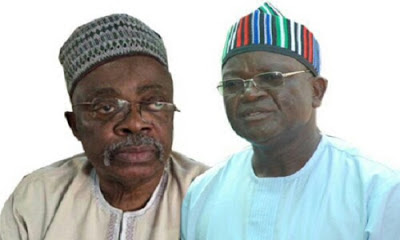 A former commissioner for police, Alhaji Abubakar Tsav, on Tuesday said that the governor of Benue State, Chief Samuel Ortom and his Security Adviser, Colonel Jando rtd, are behind crimes, atrocities and insecurity in the state.

The former police chief made this known in a statement he personally signed and sent to journalists this evening.

Tsav continued that claims by a Benue-born notorious criminal, Mr. Terwase Agwadza aka Gana, on Channels Television this afternoon, that Governor Ortom’s Security Adviser, Colonel Jando, sold guns and ammunitions to him on more than three occasions could not be brushed aside.

He added that it is only an insane man that would say Gana is lying in his open allegation that Colonel Jando sold arms to him.

Tsav statement reads: “I insisted in my earlier condemnation of the Amnesty program, that the arms surrendered by the bandits be turned over to the Police to ascertain their sources but no one listened to me. How then can a sane man say GANA is lying by alleging that Colonel Jando sold arms to him?

“Another interesting angle to this case is, Colonel Jando left the Nigerian Army prematurely for his alleged involvement in Coup de tat. He can rightly be described as a disloyal and untrustworthy officer.

“During his tenure as Security Adviser to George Akume, many young men in Kwande and Tarkaa LGA who were opposed to George Akume were murdered in cold blood and no one was arrested or prosecuted.
“This is the man George Akume and Samuel Ortom want to impose on the Tiv People as their next TOR TIV.

“Governor Ortom claimed during the TV program that his Amnesty Program was a ” HUGE SUCCESS” but GANA and his 2i/c Moji vehemently refuted this. They said they were promised training overseas but nothing like that happened either in Nigeria or overseas.
Rather they were abandoned and uncared for.

“All beneficiaries of Ortom’s Amnesty Program have been arrested and remanded in Prison custody following Igbana’s murder. How can a man in his right senses adjudge this ruse as successful?

“I had severally described Governor Ortom’s Amnesty Program as a fluke and his foot soldiers and mercenaries, called me names. Ortom himself sued me to court claiming 1Billion Naira for alleged defamation and slander”

Alhaji Tsav further stressed that Ortom’s Amnesty Program revolved only on GANA, adding that the intention was to afford him the opportunity to recruit more militants for the 2019 general election in Benue State.


He however urged the Nigerian Police to thoroughly investigate the relationship between GANA, Ortom and all his aides.
“There is more to it than meets the eye and what Ortom wants the FG and Nigerian Public to believe” he concluded