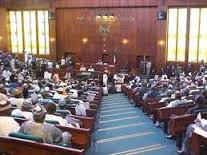 Lawmakers at the Benue State House of Assembly on Tuesday literally turned the hallowed chamber to a boxing ring
The executive fight, Idoma Voice learnt broke out following the election of Barr Adanyi of the (APC Makurdi south) as Majority leader.

Apparently not okay with Adanyi’s election, Hon. Martins Aza (PDP Makurdi North) objected saying they are 16 in the house so should have the majority.

Argument ensued between two lawmakers in the process who reportedly descended on each other in Commando style, thus exchanging deadly blows.

However, the timely intervention of other lawmakers present prevented the lawmakers from causing more harm.

Meanwhile, the state governor, Samuel Ortom has nominated 13 persons to be screen by the fighting lawmakers as commissioners into his cabinet.