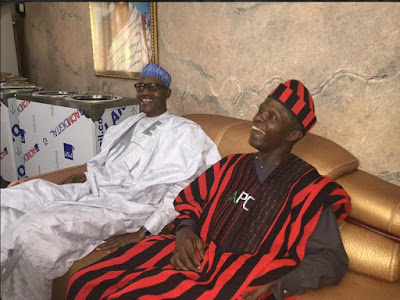 The monarch stated that Buhari’s visit can placate the people who were grieving over the killing of 71 persons by suspected Fulani herdsmen.

Prof. Ayatse speaking to newsmen at his temporary palace in Gboko, headquarters of Tiv nation said Benue people voted massively for the president in 2015 therefore it was necessary for him to identify with them at a time like that.

He described the attacks on his people as barbaric, unsolicited, unjustifiable and coordinated by herdsmen, while urging Buhari to act swiftly on warnings by Governor Samuel Ortom.

He said “I am expecting that the President will come but if he does not, then that means he is not treating us as friends.

‘’Even if he comes and waves at the people and say I feel your pain and sorrow, it will do a lot of good. When he comes himself, his whole being will be here and the impact on the people will be greater than sending representatives

’’The President is showing negligence by being too slow in responding to the warnings given by Governor Samuel Ortom of impending attacks by the herdsmen. I am not satisfied with the efforts made so far by the Federal Government in deploying troops to stop the attacks as well as the comments made by the Inspector General of Police who described the killings as communal clash.”

Ayatse further described alleged statement by Inspector General  of Police Ibrahim Idris that that attack was a communal clash as unfair to Benue people.

“We feel very unhappy that it is happening to us as citizens of Nigeria. We sacrificed for the unity of this country. There is no household that you go to in Tiv land that you will not find a soldier who fought for this country. The killings have continued even as I talk with you.

”The Federal government has made some efforts but I am not satisfied with the efforts. For the IGP to describe it as communal clash is not fair. We do not share border with Fulani so why would anyone say that it is a communal clash.

“Anarchy and impunity have taken over our country. I hope with the coming of the Inspector General of Police, we will see more seriousness. We will see their action and the kind of mandate they have. If they (hersdsmen) stop killing my people, then I will know the Federal Government is serious”, Prof. Ayatse added.
For Advert: Call 08171607004, 09058228464 Follow us on Twitter @idomavoice, @idomanews Send us releases at idomavoice@gmail.com