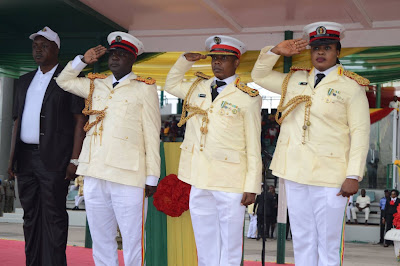 The National Commandant of the Nigeria Peace Corps, NPC, has explained why intending applicants are asked to pay the compulsory N40,000 fee before joining the organization.
He made this known while was responding to questions by journalists over the controversies surrounding the complaints made by some applicants who were asked to pay the compulsory fee.
Akoh explained that the Nigeria Peace Corps is a non-governmental organization which has no allocation from the federal government, hence, the reason for the payment.

According to him, the N40,000 are used used for the purchase of complete uniforms, training materials, payment for trainers and other things needed in the course of the training.

He added that as soon as President Muhammadu Buhari assents to the bill, the payment will be stopped.

The National Commandant recalled that in 2004, the Independent Corrupt Practices Commission, ICPC, investigated the allegation of money extortion, but discovered that it was “properly used by the organization.”

He said, “I’ve answered this question severally, and I will never get tired of answering it. We have never forced anybody to join the organization, everybody here paid the compulsory N40,000 before joining.

“I recall that in 2014, the same issue came up and the ICPC was asked to investigate us, only for them to find out that that the fee was legal since we weren’t getting any special allocation from the federal government.

“But I assure you that once President Buhari assents to the bill, the fee will stop and we will give out the forms free of charge across the federation.

“As we speak, no member of this organization who is a graduate earns less than 40k in a month” Akoh added.