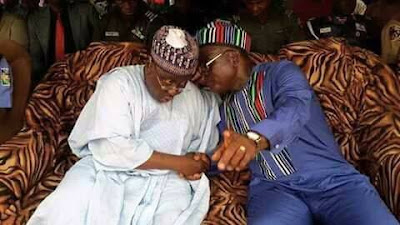 Former Minority Leader in the Benue State House of Assembly, Hon. Egahi Oyinu, who represented Agatu state constituency between 1999-2003, has described governor Samuel Ortom as not only being possessed, confused and lost bearing but also a mad lion that must be tamed now before daybreak.

Hon. Oyinu was speaking on the backdrop of Wednesday proclamation by governor Ortom that Fulani should be allowed to freely grazed on Agatu land as according to him, they have assumedb the status of indigenes.
The former assembly leader who regretted the situation where traditional rulers and political vultures from the area were forced and cajored to sign the Fulani settlement agreement at Government House Makurdi with the exchange of naira notes while at home, there were protest over the matter everywhere as demonstrated by the placards emberassing governor Samuel Ortom and his Nasarawa counterpart, Tanko Al-Makura
In a verbatin interaction with me this afternoon, Hon. Oyinu said “Agatu people deserve more compensation than the North-East Nigeria. Are we not part of Nigeria?”
“Ortom should leave Agatu alone if he can not protect us. Let him not send Fulanis to invade our land again. Yes, he has shown us that he is a businessman but Agatu is not for sale.
For now, we are calling on former Senate President, David Mark to, in his usual way, come to Agatu and save us from the cluches of the possessed Lion called Ortom once more”
Hon. Oyinu is also a stakeholder and one time chairman of Agatu local government area.