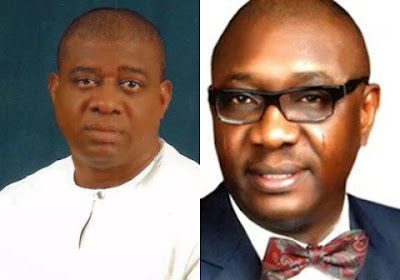 Saleh has said the Appeal Court never ordered him to vacate his seat for Hon. Christian Adabah Abah.
Speaking through his Legislative aide, Steve Okwori, at a press briefing, Saleh said the Appeal court ruling on February 7, 2015 did not mandate the Speaker of the House to swear in Hon. Christian Adabah Abah, otherwise known as Mad Lion, in his stead as wrongly held in some quarters.
Saleh’s claim is coming at the heel of a recent protest by some members of the constituency who on Thursday demanded the immediate swearing-in of Christian Adabah by the speaker.

At the briefing, Okwori revealed that Saleh has taken the matter to the Supreme Court to seek further clarification.

“The appeal court in its ruling stated clearly that Hon Christian Adabah Abah’s appeal on certificate forgery and perjury ‘partially succeeds’. Our lawyers told us categorically that ‘partially succeeds’ in law cannot be properly situated.
“There is no order from the appeal court that Christian Adabah Abah should be sworn in. If there is, let them show us. Hon. Hassan Saleh has gone to the Supreme Court to seek clarification on the matter.
“We have all the evidence that Hon. Christian Ababah Abah forged his Federal Polytechnic, Mubi certificates, and we are ready to present them when the time comes,” Okwori said.