News from Benue: 10 things happening in Benue State this Friday

News from Benue: 10 things happening in Benue State this Friday 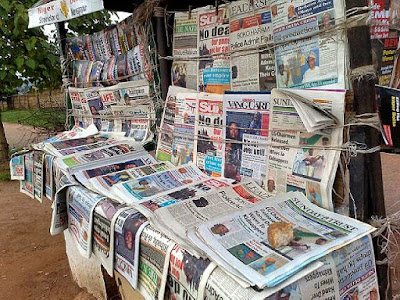 1. Former Senate President, David Mark, Thursday returned to his ancestral home after the Court of Appeal sacked him from the National Assembly, Mark, who was accompanied by few political godsons was received by some loyalists in the heart of the heart town amid cheers.

2. Governor Samuel Ortom of Benue State has directed the Bureau for Local Government and Chieftaincy Affairs to suspend the electronic system of payment and ensure that workers yet to receive salary arrears from the bailout funds are paid without further delay.

3. All Middle Belt Youth Forum, (AMBYF) has condemned in strong terms the nullification by the Appeal Court of the election of former Senate President, David Mark, as the lawmaker representing Benue South Senatorial district, Benue State.

4.Ahead INEC’s conduct of rerun in  his constituency, Senator David Mark has warned his people of Benue South District against permitting a situation where outsiders decide the destiny of Idoma people.

He said: “We must decide for ourselves what we want not what outsiders want us to be. That we must resist.”
5. The paramount ruler of Idoma community, HRM, Chief Elias E. Obekpa has assured former senate president, David Mark that the people of Benue South will return him back to Abuja in the forthcoming rerun.
6. Ahead of the Benue South senatorial rerun, candidate of the All Progressives Congress, Com. Daniel Onjeh, Wednesday met with Minister of Agriculture and Rural Development, Chief Audu Ogbe for what he tagged fatherly blessing.
7. The All Progressives Congress, APC, candidate in the forth coming senatorial rerun election in Benue State, Comrade Daniel Onjeh has appointed Director of Peace Corps of Nigeria, Ambassador Dickson Akor as his campaign director.


Onjeh in a statement issued through his media office on Wednesday, also named Bar. John Ochoga as Chairman, Technical/Advisory Committee of the Onjeh Campaign Organisation.
8.  Benue State Government has declared a three-day mourning for the paramount ruler of the Tiv people, the Tor Tiv, Alfred Torkula, who died in November.
The paramount ruler, who was installed the fourth Tor Tiv in April 1991, ruled the Tiv kingdom for 24 years and died at the age of 71. He was the longest serving Tor Tiv.
9.  Immediate past President of the Senate , Senator David Mark  has assured that Benue South Senatorial zone will remain impenetrable for the opposition , All Progressive Congress ( APC) in the forthcoming re-run election.
This he said is anchored on the overwhelming solidarity and support “by my people  who are  solidly behind me . I can tell you without any fear of contradiction that there is no opposition to my party, the Peoples Democratic Party (PDP) in my zone”
10. The Justice Kpojime Commission of Enquiry in Makurdi has heard how millions of naira were taken to Benue State ex-Governor Gabriel Suswam at the Governor’s Lodge in Makurdi, from the Ministry of Finance, without following due process.
The Government House Accountant, Mrs. Janet Aluga, told the commission that the Permanent Secretary, Ministry of Finance, Mrs. Ruth Ijir, on April 10 called her to go and collect N100 million from a bank for Suswam, which she did.