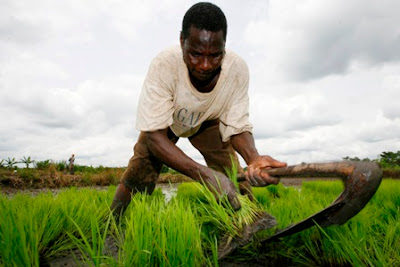 By Ade Adefeko
I wrote this article in the early months of this administration to prepare their minds for what was on ground and the expectations of Nigerian therefrom.  Over a year down the line, we still seem to be in a policy limbo though an attempt has been made to redress that by the Agriculture Minister, Chief Audu   Ogbeh;.a man I have tremendous regard and respect for. Better late than never?  Anyway I was at the launch of the Agricultural Promotion Policy 2016-2020 some weeks back.
The policy and strategy document which is 129 pages long seeks to build on the successes of the Agricultural Transformation Agenda by closing the key gaps. Impressively and in a radical departure from past governments you have an administration that recognizes that a few steps were taken and all that needed to be done was to build upon same and not legislate or plan based on electoral cycles as evidenced by the push of the plan into 2020.
As a background, Nigeria’s food import is growing by about 11 percent per annum, with top imports and the sum of 11 billion dollars spent on wheat, rice, sugar and fish according to Central Bank of Nigeria As a nation our Agricultural output is meanwhile growing at about 6 to 7 per cent annually. Dismal you might say. The last administration made many attempts to unlock Nigeria’s agricultural potential. The country has a total land area of 92.4 million hectares of which 84 million is arable and 32 million of that is cultivated. Alarmingly, only around 0.8 percent of the arable land is even irrigated, compared to the 28 percent in say Thailand. Although there are approximately 110 million young people in the work force, due to low wages for laborers in the agricultural sector and lack of mechanization which the young are keen to adopt, food production has largely been left to the elderly who are in the age bracket of 60 to 75 years.
Nigeria possesses nearly 279 billion cubic meters of surface water, yet potential sources of irrigation from two of the major rivers in Africa – the Niger and Benue Rivers – remain unexploited. The primary challenge at hand is how to increase agricultural productivity and all year round production instead of the perennial two seasons of Dry and Wet season farming. Yields per hectare are only 20-50 percent of comparable yields in developing countries like Brazil, Indonesia, Thailand and Malaysia and there is room for much room for improvement.  In terms of input, Nigeria has one of the lowest usage rates. Mechanization intensity remains low (perhaps 10 tractors per 1000 hectares compared to Indonesia’s 241 tractors per 100 hectares).
Our first challenge is national soil mapping which gladly the current minister has spoken to but majority of the subnational governments (the states) have failed to open how much more read. That document speaks to soil quality and explains the fact that not all soils are suitable for every crop and that is a good start on the part of the ministry and by extension the federal government. The country has about 14 million farming families with an average land area available per farmer in the range of 1.8 hectares. Not a good average for a country like Nigeria which wants to feed itself and export.
The last administration tried to tackle this menace by establishing the Agricultural Transformation Agenda (ATA) under Dr. Akinwumi Adesina, the current African Development Bank (AFDB) President. The ATA essentially called for people to start treating agriculture like a business by integrating food production, storage, processing and industrial manufacturing through value chains, focusing on sectors where Nigeria had a comparative advantage. It also included plans to adopt import substitution measures to drive sector growth and investment-driven strategic partnerships with the private sector. Adesina’s major achievement and the hallmark of his tenure was the Growth Enhancement Support Scheme (GES) for fertilizer and seed distribution. This ended nearly four decades of corruption by eliminating direct procurement and distribution of seeds and fertilizer, enabling private sector seed and fertilizer companies to sell directly to farmers.
As a database of around 15 million farmers was developed, along with an email wallet for input delivery, the need for middlemen was erased. Unfortunately, as it now stands, the previous administration ended up owing millions of dollars to fertilizer and seed companies which as I write is being paid in trickles and we hear the states cannot pay their counterparty contribution and everyone is relying on Federal Government Intervention. Four months to the end of the year we are waiting for Godot a la Samuel Beckett.

Still, this GES policy should be continued along with the Staple Crop Processing Zone (SCPZ) concept, which strives to boost import substitution and create wealth for farming communities. The SCPZ will enhance the development of rural farming neighborhoods through the building-up of modern processing capacity in agricultural production clusters.
Through this process, farming productivity in such clusters will be supported in order to sustain processing needs and creating structured markets through organized linkages between farmers and processors. Thirteen such zones were to be created to absorb production in a scheduled manner and address the perennial problems of post-harvest losses. However, most have been created in name only, with minimal impact. It would be good for the current minster to fine-tune the SCPZs to fix these deficiencies. In the current road map I see no direct mention of such. Companies like OLAM for Rice and VICAMPRO for Potato should enjoy such status as they have both made considerable investments and need a bit of handholding to navigate the murky waters of infrastructure and enduring policy.
To put things in perspective, Nigeria imports the equivalent of about 250 to 300 million dollars’ worth of French fries imported primarily from South Africa, Netherlands and Belgium. As for Rice according to the Federal Government of Nigeria, we consume 7 million tons of Rice, produce 2.7 million tons and have a gap of 4.3million that needs to be filled via local production or imports though am hearing we want to ban imports from 2017/2018 which I think is ill advised as we have not shown the capacity to ramp up enough domestic production to warrant that.
In the area of financing, the government introduced the Fund for Agricultural Finance in Nigeria (FAFIN), which will serve small-holder farmers and agribusinesses and the Nigeria Incentive-Based Risk Sharing System for Agricultural Lending (NiRSAL), a Nigerian Central Bank single-digit financing framework for agriculture. The government also provided fiscal incentives to encourage domestic import substitution, including zero percent duty on agricultural machinery and equipment imports, pioneer tax holiday for agricultural investments, duty waivers and other industry-related incentives to support the private sector. This has currently being improved by the current administration and is no longer directly under CBN but a standalone with a full fledge Managing Director.
In conclusion, looking at where we are coming from I would rate the last administration average in terms of concrete results though I must give it to Dr Adesina former HMARD who had to use sheer guile, gusto and personal gravitas to get things done and sometimes got ill-advised along the way by the powers that be.
For Advert: Call 08171607004, 09058228464 Follow us on Twitter @idomavoice, @idomanews Send us releases at idomavoice@gmail.com
Previous Post