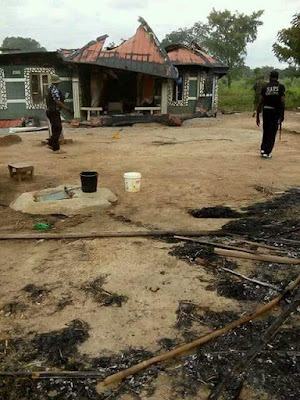 There was confusion in Katsina-Ala local government in Benue State Saturday morning after officers of the Nigerian Army invaded Gbishe community, setting houses on fire.
It was gathered that the soldiers had arrived the community at about 5am in about 16 trucks harassing villagers and burning down buildings including a school located in the town as well as the home of former warlord and beneficiary of Benue Amnesty programme, Mr Terwase Akwaza also known as Ghana.
Consequently, the routes to Gbishe from Katsina-Ala town through Tor Donga and Takum have all been blockaded with two armoured cars stationed at Tor Donga to wall off traffic to the area.
Eyewitness said the soldiers are on the trail of the former warlord who has being on the wanted list of the police over the murder of Governor Samuel Ortom’s aide on Security who was assassinated two months ago.
Confirming the development, the Acting Secretary to the State Government, Bem Melladu said the action was approved by the State Security Council.
According to him,  ‘It has become necessary to inform the general public that a joint Security agencies’ operations commenced around Gbishe and its environs today as they search for Mr Terwase Akwaza, alias Ghana in connection with various criminal activities.

“The action followed the refusal of Mr Akwaza to report to the police to answer charges of murder, kidnappings, and armed robbery.
“The operation was approved by the State Security Council.
“Security reports have linked Mr. Akwaza with the assassination of Mr Denen Igbana,  Senior Special Assistant to the Governor on Special Security, five Civilian Joint Task Force members in Ukum local government area and several killings as well as the kidnap of the Dangote Cement Company Indian workers.
“Mr Akwaza, alias Ghana, had shunned invitations by the police hence the operations became imperative.
“Governor Samuel Ortom had also informed leaders of the Gbishe community that, if Mr Akwaza failed to report to the police he would be fished out.
‘The operation is part of the second phase of the Amnesty programme which is the stick approach after the carrot strategy had expired.
“People are advised not to give cover to Mr Akwaza and his gang members but to rather give information about his whereabouts by text or calls to the security agencies through these numbers 08066006475, 07067374913, and 08036363531. “