Ortom plans to use Owukpa coal to generate electricity

Ortom plans to use Owukpa coal to generate electricity 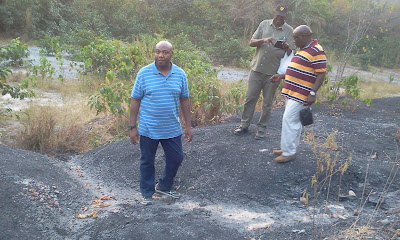 Benue state governor, Samuel Ortom has assured the people of the state that his government would not fail them even as he admits that the situation is not rosy with the economic recession and paucity of funds occasioned by the downturn in oil revenue from the global fall in prices of crude oil.

Speaking Sunday at a dinner meeting for political leaders of Benue South Senatorial district held at the residence of his deputy, Engr. Benson Abounu, Governor Ortom said his government is committed to transforming the lives of the people through programmes and policies that would enhance their economic wellbeing.
Governor Ortom who reeled out several areas his government has intervened to make life more meaningful to the people said his efforts are been hampered by the lean resources available to government and the campaign of deliberate misinformation mounted by the opposition.

He attributed this campaign to a desperate attempt by the preceding government to get at him and his government for demanding a return of the over N107b it criminally took away from the state.
He said as a custodian of the peoples mandate, he owes it a duty to ensure that what belongs to them but was criminally looted and carted away is returned for use in addressing the most pressing needs of the people.

While he lamented the difficulties Benue and 26 other states in the country are facing in the payment of salaries to workers, Governor Ortom called on the people not to be dampened by the harsh economic situation but to take advantage of the recession to look inwards and invest in agriculture where he said the state has comparative advantage.

He disclosed the intention of government to revolutionise agricultural production in the state and use it as the launch pad for its industrialization drive.

Governor Ortom told people that the state is in the process of reviving the Taraku Oil Mills and other industrial concerns in the state to boost the economy.

He assured people of the zone that the Igumale Cement Company would soon be completed while plans are also on ground to use the Owukpa coal to generate electricity. In addition, he stated that the Company would futher expand into steel production.

One killed as police, poly students clash in Benue (PHOTO)

One killed as police, poly students clash in Benue (PHOTO)