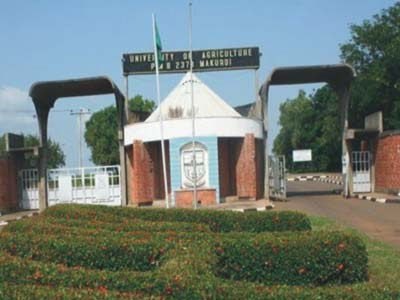 THE Vice-Chancellor of the Federal University of Agriculture, Makurdi, Prof. Emmanuel Kucha has denied insinuations that he mismanaged the sum of N1. 5 million meant for the development of the institution, describing those peddling the rumor as mischief makers.
Kucha who made the denial while chatting with journalists in his office yesterday also dispelled rumour making the rounds that he was arrested by the EFCC in Abuja.
“No! No! I don’t have any case before EFCC; I have never visited EFCC office as speculated; and nobody has ever invited me there.”
“It is obvious that somebody is trying to run the university and its leadership down. How much is the entire budget of the university in a year and how much has the university gotten since I got into office about three years ago that I would embezzle such an amount?” he queried.

On allegation that the university bought some items without due process and did not receipt such items, Kucha said such was mere speculations to tarnish his hard-earned reputation, stating that due process was strictly followed in everything the institution has done under his leadership.

The Vice Chancellor acknowledged that the audit query which he received came in September, 2015 and was well responded to, with the university supplying all the information needed to the office of the Auditor General of the Federation, adding that it is a normal administrative routine.

Benue reaches agreement with workers to alternate payment of salaries