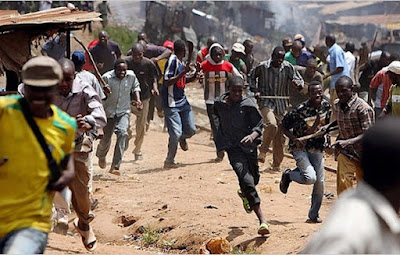 A group, the Middle Belt Forum has blamed the killings and wanton destruction of property in the North-Central by Fulani herdsmen on parochial appointments of security chiefs by President Muhammadu Buhari, declaring the ongoing killings as ethnic cleansing with the semblance of Rwanda genocide.

The group bared its mind at a conference in Abuja where its president, Dr. Bala Takaya, stated that the people of the middle-belt have become endangered species with the herdsmen out to wipe off all nationalities from their ancestral lands
Reading from the text of the briefing entitled: ‘Nigeria: A Nation Under Siege’, Takaya said: “There is no gainsaying the fact that Nigeria of today is passing through perilous times. More so, the Middle Belt region which is witnessing wilful pogrom by way of ethnic cleansing by Fulani herdsmen just to enable them wipe off all nationalities from their ancestral lands. For, if not ethnic cleansing, what do we make of it.

“They kill, maim and rape at will. They even brag that in this (Middle Belt region) they (the killer Fulani) have immunity that is superior even to those of our governors and their deputies.

“Our Middle Belt communities have become endangered species even in the full watch of their elected federal government. What we are bitterly experiencing under this dispensation is our ethnic cleansing aimed at disinheriting us of our ancestral lands.
“Do we deserve to go through all this? What is our offence or sin? And who will tell Mr President that he is wrong? Who will save us from this menace? To the international community, why is the world sleeping while another Rwanda is unfolding?”

The group lamented that lives of human beings in the Middle Belt region were now cheaper than those of cows, revealing that hundreds of lives are being lost in Adamawa, Taraba, Benue, Southern Kaduna, Plateau and recently, Kogi state.