Why we are organising Drama Concert in Lagos – Idoma-born dramatist, Ekre Christian

Why we are organising Drama Concert in Lagos – Idoma-born dramatist, Ekre Christian 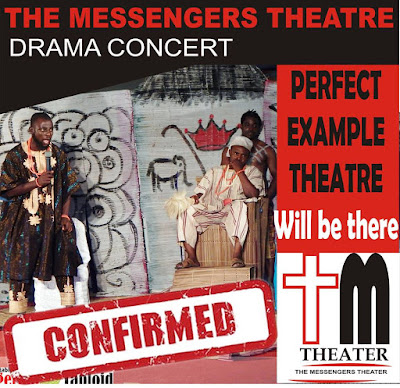 All is now set for The Messengers Theatre Drama Concert 2016 edition.
Speaking recently to press men in Lagos, The organizer of the event, Mr. Ekre Christian explained that the purpose of the concert was to create an atmosphere of evangelism to reach out to lost souls in Lagos and the nation at large, to promote the gospel of our Lord Jesus Christ and to let the world know that there is no lasting peace outside Christ.
He added that the concert is a way of contributing to society.

On what prompted this, he said: “It is as commanded, go ye and preach the gospel. We need to do as the scriptures have said; this is our own way of preaching the gospel. (Matthew 28:19)
“The event is going to be explosive; it will feature songs and comedy. We are having the likes of Baba 120, and The Perfect Example Theatre.”
On the title of the concert, he said: “The title of the drama concert is THE BIBLE AND THE BULLET. The Bible says in Proverbs 16:25, that there is a way that seems right unto a man, but the end thereof are the ways of death.
“We all complain about the security situation of our country, but we are doing nothing to help, instead we are leaving all to the government alone.
“We believe that drawing people to Christ would drastically reduce the level of crime in our society.” He concluded
The event is scheduled for 6thof November 2016. Blue Carpet at 3PM, while main event begins at 4PM.
Venue for the event is Covenant Believers Christian Centre, Magnet Shopping Plaza, 525 Agege Motor Road, Ladipo Bus Stop, Oshodi Lagos.