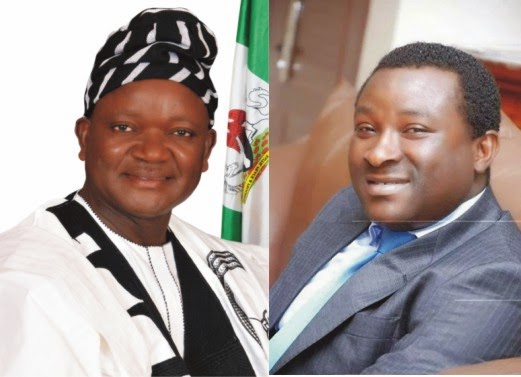 Barely 24 hours to the gubernatorial elections across the country, a group known as the Nigerian People’s Choice Opinion Poll, says it has conducted an opinion poll in Benue and named the All Progressives Congress, (APC) governorship candidate, Dr. Samuel Ortom as a probable winner of the election in the state.

This is even as the PDP in the state has rejected the purported opinion poll describing it as a sham organised by faceless people who are only out to cause confusion and reap where they have not sown.
In a press statement issued yesterday in Makurdi, the Benue state capital, the Nigerian People’s Choice Opinion Poll, through a member of the Team, Naomi Oboyi, claimed that “the governorship opinion poll was conducted from February 1st. to 15th. 2015.

“We received a total of 3,830 SMS votes across state with some cancellation due to multiple SMS votes; and at the end Terhemen Tarzoor of PDP scored 1,083 SMS votes while Samuel Ortom of the APC scored 2947 SMS votes.”

But in a swift reaction to the purported outcome of the poll, the Director of Media in the Tarzoor/Ngbede, Peoples Democratic Party, PDP Gubernatorial Campaign Organisation, Dr. Cletus Akwaya described it as “a gimmick and sham that was masterminded by a phony group working for the APC.”

“The whole thing is the figment of the imagination of those who came up with that figure, because the truth is that they lack the wherewithal to embark on such a project. They do not have the professional and technical expertise to carryout such an assignment.”
Akwaya maintained that opinion poll was part of the activities of public relations noted that the said group which claimed to have conducted the poll is not known or certified by the Nigerian Institute of Public Relations (NIPR) in the state.

“Moreover, opinion polling is part of Public Relations, and haven served at the national council of the Nigeria Institute of Public Relations, NIPR, and being a member of the council in the state, I know that the body that claimed to have carried out the poll is not known or certified by the NIPR.”