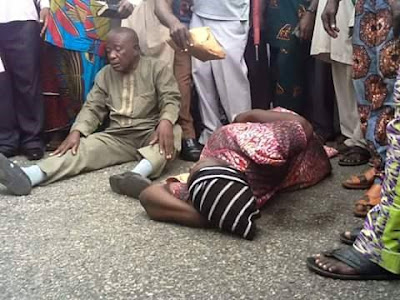 The Economic and Finance Crimes Commission(EFCC) has been petitioned by the Benue pensioners over the embezzlement of their bailout by Governor Samuel Ortom.

The pensioners said part of the bailout as was sent to the state specifically for them was not less than Two billion, three hundred and eighty seven million, four hundred and fifty-six thousand, seven hundred and eighy-nine naira, thirty-nine kobo (N2,387,456,789.39) only.

It would be recalled that in continuation of their struggle, no fewer than two pensioners had slumped recently why protesting at the People’s House Makurdi with the leadership of the protesters declaring that a week hardly passed without them losing about four to five members who die in penury across the 23 Local Governments of the state.

But in a letter to the anti-graft body with reference number CNP/COR/VOL 1/29 with the title “Complaint over Administrative Injustice Against Benue Pensioners”, signed by Comrade P T Ikyaabo and fifteen others who all provided their contact numbers, the Concerned Pensioners lamented that the Ortom’s administration on assumption of office had computed the outstanding six months unpaid pension amounting to N2,387,456,789.39 and collected same amount from the Central Bank of Nigeria but failed to pay pensioners wondering where the money “suddenly developed wings and flew to”.

Insisting that the N12,158,049,684.82 included the said N2,387,456,789.39 covering arrears of November, 2014-April,2015 for state pensioners, the Concerned Pensioners quoted Section 173 and 210 respectively of the Nigerian Constitution 1999 as amended to buttress how governments perpetually contravenes the law regarding pensions and other statutory benefits of retirees.

Part of the petition reads, “the Independent Corrupt Practices and other Offences Commission (ICPC) and the Nigeria Labour Congress (NLC) have jointly established that the Benue state government is yet to account for not less than One billion, six hundred and fifty million, nine hundred and three thousand, eighty four naira fifty-two kobo (N1,650,903,084.52) out of N12,158,049,684.82 collected as bailout funds for state workers and pensioners”.

The Concerned Pensioners in appealing to the anti-graft agency to investigate the whereabouts of their money said, “we are seeking your urgent and decisive intervention in the protracted struggle by the Benue pensioners to be paid what legitimately belongs to them” also attached to their petition a request by the Benue state government to the central bank with computations titled “Benue State Government Outstanding Payments as At May, 2015” where the N2,387,456,789.39 featured on the third column after those of Pay Staff, Staff Salaries (BSUTH,BSU-COHS,BPPC­L,BBB,HE/Dep.Gov and BSU).