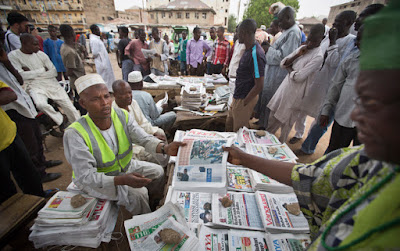 2. Governor Samuel Ortom yesterday granted amnesty to a notorious criminal gang leader, Mr. Terwase Akwaza, popularly known as Ghana even as he extended the amnesty period for surrender of illegal weapons to end of September, 2015.

Addressing newsmen at the end of a Security Council meeting he said Mr. Akwaza had responded to his call to surrender the weapons he possessed illegally and also desist from his activities which constituted a security threat to individuals and communities in Benue and Taraba States.

3. After a long wait, The Federal Road Maintenance Agency (FERMA) has commenced work on the Makurdi/Gboko road in Benue State.

Some of the areas already patched include Nom Nor/Rice Mill/ Fidei Polytechnic road, Gboko, where erosion was threatening to cut the road into two and filling of potholes around Abinsi in Guma Local Government Area of the state.

4. Gunmen numbering about 20 suspected to be thugs, Sunday morning, broke into a Benue State High Court premises making away with a 60 KVA Marapco generator.
The men were also reported to have beaten the security guard on duty, Mr Francis Ataa to a pulp and tied him up with ropes as they drove off in a hilux van.

6. Terura Suswam, elder brother of immediate past governor of Benue State, Gabriel Suswam has refuted the hearsay that they recently visited his successor, Samuel Ortom to beg him not to probe his government.

Shortly after the meeting, rumour went viral that the former Governor had gone to beg the incumbent Governor, Ortom to stop the probe already instituted to investigate his administration by the Ortom led government.

But in a swift reaction, Suswam’s elder brother who was at that meeting told newsmen in Makurdi yesterday that there was no basis for Suswam to beg anybody because he had done nothing wrong.

7. Benue StateCommissioner for Health and Human Services Dr. Cecilia Ojabo is the Ihas decried the pathetic situation of the primary healthcare in the state. Ojabo who is also an associate Professor of Ophthalmology at the Benue State University Teaching Hospital (BSUTH) said the state is a hyper endemic area for onchocerciasis (River Blindness).

8. The national publicity secretary of the Peoples Democratic Party, PDP, Olisa Metuh has bombed Senator Barnabas Gemade for dumping the former ruling party. Metuh in the statement described Metuh and some pioneer members of the party who defected to the APC as lazy politicians who were afraid of competition.

9. Benue State Governor, Samuel Ortom, today directed Works and Housing Commissioners to assess the old Makurdi Prisons for renovation by the state government.
He gave the directive when the Controller of Prisons in the state, Mr. Oyigocho Ogbole, visited him at the Benue Peoples House.

10. Benue State Governor, Samuel Ortom, has told criminals too shy to approach government directly that they could submit illegal weapons in their possession to the clergy and traditional rulers who would hand over to the amnesty committee.
He spoke at the funeral of the late Mrs. Kwaghngu Victoria Atsaga, in Mbakuha, Ushongo local government area.