BENUE STATE IN THE NEWS: Ten things happening in Benue this Tuesday

BENUE STATE IN THE NEWS: Ten things happening in Benue this Tuesday 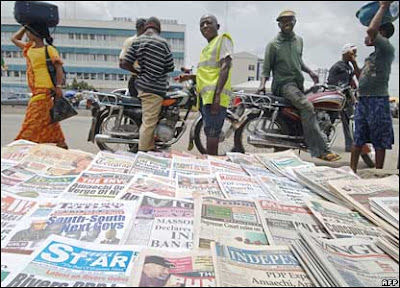 1.  We start this morning news review on sad note. Residents of Utonkon, a suburb of Benue State were yesterday shocked after a man was arrested for cutting of his neigbours head over land dispute.

The suspect, Rapheal Agazi and the victim Asim have been at loggerheads over a piece of land in located in the community. Agazi is currently cooling his heels at the Otukpo Police Area Command.
2. Wife of the Governor of Benue State, Chief (Mrs.) Eunice Ortom, yesterday  paid courtesy visit children at the TIVID Orphanage Home, North Bank, Mkurdi. On hand to receive Her Excellency was Ms. Favour Adah Paul who is in charge of the home.

The First Lady prayed with the children and encouraged them to be of good behaviour.

3. Benue State Governor, Samuel Ortom, today pledged to investigate why funds from the Subsidy Reinvestment and Empowerment Programme, Sure-P, meant for payment of those engaged in Benue were not available for them.

He made the disclosure while addressing those affected who were protesting the non-payment of their stipends and had blocked his way to the office at the gate to the Benue Peoples House.

4. The immediate past Minister of Interior, Comrade Abba Moro, has vowed to challenge what he said was betrayal of the Peoples Democratic Party (PDP) by a state lawmaker, James Ejembi, representing Okpokwu constituency at the Benue State House of Assembly.

Ejembi allegedly betrayed the cause of the PDP which had majority in the House by supporting the All Progressives Congress (APC) c andidates with minority legislators to take the position of speaker and other key positions while he got the deputy speaker position.

5. Students of Benue State University, yesterday laid the ‘laid’ the school to rest. The enraged students as well as staff of the school trooped out to protest the protracted strike embarked on by the Academic Staff Union of the institution and the refusal of the state government to attend to workers’ plight.

6. The immediate past Minister of Interior, Comrade Abba Moro, has denied his involvement in the alleged disappearance of N21bn during his term as the minister.
He also denied his alleged arrest by anti-graft agencies as widely reported on social media.
Moro said he got several calls from friends and well-wishers when the news of his alleged arrest hit the media.

They expressed their grievances with a casket with a inscription, RIP BSU.

Morgan is a native of Idoma in Benue State, he was until his elevation Commander, Logistics Command, Nigerian Air Force, Ikeja.

8. The Federal University of Health Sciences, Otukpo, Benue state, has denied a claim posted on the social media that it had commenced the sale of form for the 2015 academic session.
This is contained in a statement signed on Saturday by the University’s Spokesman, Mr Isaac Ameh, and made available in Abuja.

9. Benue State governor, Samuel Ortom, has declared that the state government will not spare anyone caught in gay activities in the state .

Governor Ortom made the announcement today at the old banquet hall of the Benue People’s house in Makurdi during a courtesy call on him by the Prelate of the Anglican Communion of Nigeria, Archbishop Nicholas Okoh.

10. The Benue State Ministry of Finance has denied charges of graft levelled against some of its staff on social media platforms.

Governor Samuel Ortom had directed the Permanent Secretary and Accountant General in the Ministry to investigate allegations that their staff were collecting between five hundred and one thousand naira to prepare vouchers for those whose names had been omitted.

But the Permanent Secretary, Mrs Ruth Ijir, in a statement, denied the charges and urged those with proof to step forward.