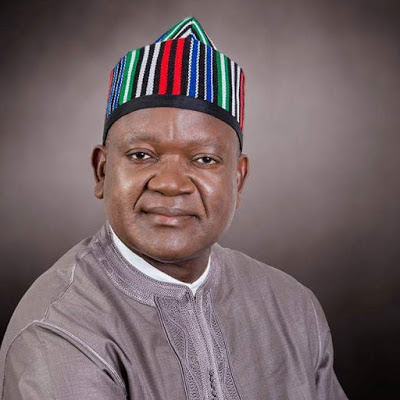 Since Samuel Ortom assumed office as the Fifth Executive Governor of Benue State in May last year, he has used every available opportunity to discourage corruption and other social vices among the citizenry.

At public functions, the Governor warns his cabinet members and civil servants against corrupt practices which made one of his Special Advisers lose his job at the early stage of the administration.
The Governor has made it abundantly clear that he would use every available legal means to recover the one hundred and seven billion naira allegedly misappropriated by the immediate past administration.

While few of the persons that allegedly misappropriated the one hundred and seven billion naira are making efforts to return part of the looted money, others are being prosecuted by anti-graft agencies.

Governor Ortom has been working closely with security agencies in the fight against corruption, cultism, examination malpractices, drug abuse, armed robbery, thuggery, kidnapping and others.

It was for the purpose of making various segments of the society to know the negative impacts of such vices that he appointed a special adviser on Ethics and Value Orientation, Mr. Godwin Idoko, who has set up machinery for the inculcation of new values into students, teachers, parents and members of the larger society through workshops and seminars in the three senatorial districts of the state.

The Special Adviser would be following the good example of the Governor by taking the anti-corruption campaign to the over one thousand secondary schools where many students and teachers need to know the negative impacts of corruption on the society.

It is being suggested that anti-corruption workshops and seminars should be held in designated centers in the three senatorial districts where there are halls that can accommodate some students and teachers from each of the public and private secondary schools in the state.

Resource persons for such workshops should speak in the languages that can easily be understood by students in post-primary schools.

In order to make the campaign have the desired impact, anti-corruption clubs need to be inaugurated in schools where a committee would be monitoring their activities.

For the campaign against corruption and other social vices to record more success, civil servants need to be vanguards of the fight within their families and the larger society.

Members of various community development associations and nongovernmental organizations should equally promote the anti-corruption campaign in the urban and rural areas.

As future leaders, youths should be made to see themselves as agents of change by discouraging corruption wherever they are.

Corruption makes some people to live above their income, so, some youths tend to believe in the get-rich-quick syndrome which often pushes them into corrupt practices and other crimes.

This is why Benue citizens, especially adults, need to show good example by living within the limits of their income.

Benue and indeed, Nigeria, has reached the stage where children should be able to question their parents and guardians about the source of funds they use to acquire multimillion naira mansions and vehicles.

Such parents and guardians who are civil servants and businessmen and women should be able to explain to the children the source of money for some of their property.

Parents and guardians should be in position to ask the children questions on the source of money for the expensive shoes, wristwatches and handsets they have.

Heads of organizations should be transparent to the extent that staff would not accuse management of closing the doors against them.

It must be emphasized that most labour disputes are as a result of the inability of chief executives of public and private organizations to allow free flow of information about how the resources are being managed.

Every citizen of Benue State should contribute towards the success of Governor Ortom’s anti-corruption campaign by being transparent and honest in their dealings with others.