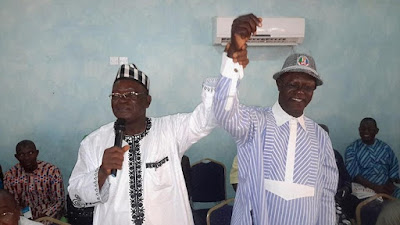 The Deputy Governor of Benue State, Engr. Benson Abounu has assured citizens of the state that the current administration will quash all form of marginalisation.

His assurance is coming at a time the Idoma natives of the state are complaining of being expunged from the scheme of the state.

Abounu said the current government under the leadership of Samuel Ortom will not welcome anything that would tear the sate apart. 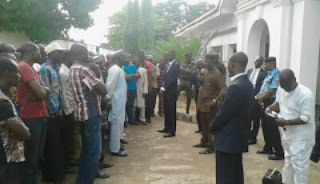 The deputy governor gave this assurance when he received a political group from Ari (Ijigbanu, Ulayi and Ekile) of Ado local government at his office last Thursday.

He assured that the administration would be guided by balanced decision on appointments of people from the different geopolitical zones.

The deputy governor regretted that when party were giving opportunity to select people for various political appointments especially caretaker committees of local government it was difficult for most local government party leaders to come out with one single acceptable list from their areas.

He further stated the Ortom led government would encourage leadership of unity and purpose with clear sense of single direction that would portray the focus of APC and people’s aspirations.
He warned that the era of undue manipulation and monopoly of government machinery by a few had gone and would not be tolerated by the present government.

On welfare of people, he stated that the government presently committed to resolving issues of workers salaries to enable the government settle down and deliver dividends of democracy.

Earlier, the leader of the delegation, Engr. Simon Oketa submitted an urgent appeal to correct the marginalisation of the Ari people (Ijigbanu, Ulayi and Ekile) to enhance further political unity and victory of the APC in Ado local government Area

You have a kangaroo committee – Tsav bombs Benue governor, Ortom

You have a kangaroo committee - Tsav bombs Benue governor, Ortom