Daniel Bwala, spokesperson of the Atiku Abubakar presidential campaign, says he salutes Vice-President Yemi Osinbajo and Boss Mustapha, secretary to the government of the federation (SGF), for “rejecting” the Muslim-Muslim ticket of the All Progressives Congress (APC).

Bwala’s comment is in reaction to the exclusion of Osinbajo and Mustapha from the APC presidential campaign council.

IDOMA VOICE had earlier reported that they were left out of the 422-member list.

Reacting via a post on his Twitter page on Saturday, Bwala alleged that the duo asked to be exempted from the campaign council.

“We salute the courage of Professor Osinbajo and Boss Mustapha for rejecting the MM ticket by asking to be left out of the campaign council of APC. Say no to religious politics. Nigerians would decide at the polls,” he tweeted. 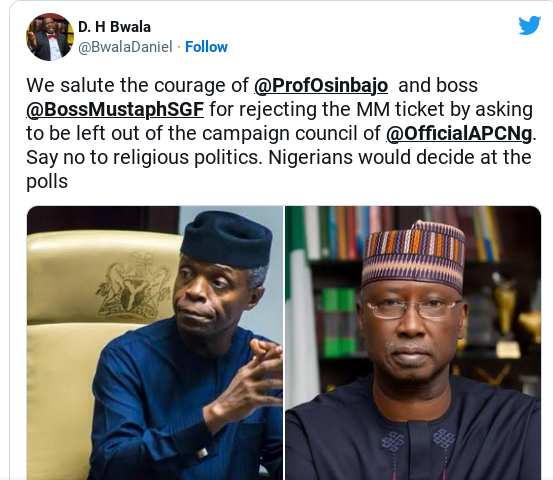 Keyamo said President Muhammadu Buhari requested the vice president’s exclusion to allow him “concentrate on governance of the country and administration of government”.

“Our attention has been drawn to some stories making the rounds that there may be something amiss within the family of the All Progressives Congress (APC) as the name of our own revered and respected Vice-President, Professor Yemi Osinbajo, SAN, GCON, is not included in the list of the Tinubu/Shettima Presidential Campaign Council,” he said.

“As a responsible party and government, all the key functionaries of government cannot abandon their positions for electioneering campaigns. The APC has the mandate of the Nigerian people to administer the country on their behalf at least till May 29, 2023, and this we intend to do with all sense of responsibility.”