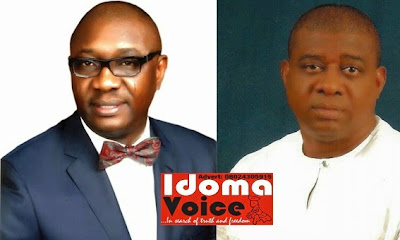 A close political observer would agree with me that politics in our land has not only forced many people to eat their tongues, but also swallowed their intestines.
I have watched and read with keen interest the many reactions greeting the invalidation of the victory of Chris Adabah Abah as the elected lawmaker representing Ado, Ogbadibo and Okpokwu at the Green Chamber of the National Assembly.
Expectedly, the mediasphere got a hot meal yesterday when Justice Adeniyi Ademola, of Federal High Court, Abuja invalidated the victory of Abah, famously known as Mad Lion thus replacing him with Hassan Saleh.
The judge in his verdict said Abah had forged an Ordinary National Diploma certificate in Accountancy obtained from the Federal Polytechnic, Mubi, in 1985.
Interestingly, the first and last time I only heard about this Hassan was in 2014 when he visited some of his family members with grinding engines, blunt hoes and cutlasses. Correct me if I’m wrong.
The name ‘Mad Lion’ caught my attention last September in a local paper with the headline, ‘return of the political mad lion’
In the said article, the writer eulogized Adabah, explaining how the people of the constituency have been singing his anthem.
Chris Adabah I don’t know, Mad Lion I don’t want to know as well, but let the truth be told, with this, we are back to the era of ohunu ere, oheche prokonu nye.
Before we celebrate the ‘fall’ of Brother Chris, let’s quickly ponder over this.
It is no longer news that the most disadvantaged constituency in Benue state is Ado, Ogbadibo Okpokwu where the level of hunger and poverty cannot be compared to zones in the state.  It is on record that for the past 20 years, no local development has been recorded in the area.
It appears that our politicians have got the same orientation during assumption into office. No one comes with a positive and impactful action capable of delivering the people from their present dungeon.
This is because we are all subsumed and consumed in the old leadership mentality by parading those desperados whose sole interest in leadership is simply for the sustainability of their immediate and extended family members. The interpretation of leadership as we have got in our land over time is leadership based on exclusion, and total deprivation. No one’ sends’ after the votes are counted.
Sadly, majority of those struggling to be crowned as the chief priest of our political shrine are the same infertile minds who have tested and failed in their various leadership positions. We are all guilty, because we allowed their vocal agility to deceive us, instead of passing our last judgment based on their antecedents.
Today, history is beginning to judge us, for giving our land away to treachery and deceit. We sold our land to yonder, and the local people are beginning to ask questions why we could be as myopic as they are.

Apology to Ali Adoyi: Here is the time, when a child will pick up a copy of the constitution and ask why we are still moving at this slow pace as a community. The time is here when we will say ‘’NO’’, to the conventional ways of our leaders.

If leadership is all about distributing grinding machines, blunt hoes and cutlasses to constituents, then ride on Saleh.
If otherwise, Mr. Saleh needs to ‘Sale’ (wait) and bow to the voice of the people.

Inasmuch as I don’t support criminality, so I don’t equally stand by mediocrity. Certificate forgery is indeed a criminal offense; but before we send the Mad Lion back to the political forest, let’s hear him out.
I am still waiting for Mad Lion to speak up on the matter, after that, will make my comment.

Before then,the question is: did he actually forge the certificate or he was unjustly nailed to the political cross by the Akpegede band boys.
We’ve only heard one the side of the story.
No matter what it is, he’s still our son. You don’t kill your goat because it consumed your echira akanpa.
Speak now, Chris speak before it is too late.

Bottomline: This is a personal opinion and it is subject to scrutiny, if you have a contrary view, please kindly put if forward.

Lawrence Ugwu writes in from Kaduna